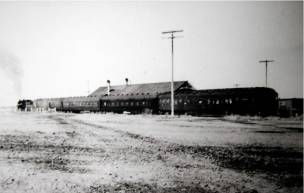 James McMillan had been associated with the Twin Falls Land and Water Co., a subsidiary of the Buhl-Kimberly Corp. He, along with Fred Gooding, George Peterson and Frank Burrington formed the Kimberly Co, Ltd. Minidoka. Those wishing to purchase a lot wrote their names on slips of paper which were then placed into a churn and drawn out by 5-year-old Oliver West. This determined the order in which the lots were sold. Ninety-three people put their names into the churn. tracts were sold for $25.00 per acre. Money from the land sale built the canal that brought Snake River water to the fertile desert. Residential lots varied from $100 for a "good" lot to $750 for a "choice" lot.